What if I didn’t have to articulate and fight for my relationship to land. What if it just was? - Rana Nazzal

All films screened during the Queer Cinema for Palestine program were available from November 11, 2021 to November 20, 2021.
Qais Assali is an interdisciplinary artist/designer born in Palestine in 1987 and raised in the UAE before returning to Palestine in 2000. His works with photography, video, performance, and in the archives seek to engage and subvert national geopolitical power dynamics. He is currently an Andrew W. Mellon Assistant Professor of Digital Design at Vanderbilt University, Tennessee. Assali taught in visual communication at Al-Ummah University College, Jerusalem, and at An-Najah National University, Nablus. He was a 2019-21 Core Fellow at the Museum of Fine Arts, Houston. He was a 2018-19 Artist/Designer-in-Residence for the Critical Race Studies Program at Michigan State University.

​Justin Ducharme is a filmmaker, writer, dancer and curator from the small Métis community of St. Ambroise on Treaty 1 Territory. He is the writer/director of four short films and is currently in development on his debut feature. Justin was the recipient of TIFF’s Barry Avrich Fellowship and is an alumni of their 2021 Filmmaker Lab. His writing has been featured in Canadian Art, Room Magazine and Prism International Magazine. He currently lives and works on Unceded Coast Salish Territory.

Whess Harman is Carrier Wit’at, a nation amalgamated by the federal government under the Lake Babine Nation. They graduated from emily carr university’s BFA program in 2014 and are currently living and working on the territories of the Musqueam, Squamish and Tsleil-Waututh as the curator at grunt gallery. Their multidisciplinary practice includes beading, illustration, text, poetry and curation. As a mixed-race, trans/non-binary artist they work to find their way through a tasty plethora of some kind of undiagnosed attention deficit disorder, colonial bullshit and queer melancholy. To the best of their patience, they do this with humour and a carefully mediated cynicism that the galleries go hog wild for.

Wanda Nanibush is an Anishinaabe-kwe image and word warrior, curator and community organizer from Beausoleil First Nation. Currently Nanibush is the inaugural curator of Indigenous art and co-head of the Indigenous + Canadian Art department at Art Gallery of Ontario (AGO).
​
Rana Nazzal Hamadeh is a Palestinian-Canadian artist immersed in community organizing both on Turtle Island and in occupied Palestine. Her photography, film, and installation works look at the complexity of decolonial disruptions, combining storytelling with critical analysis to draw links between lived experience and broader systems. Rana holds an MFA in Documentary Media from Ryerson University and currently works with prisoner justice groups in Palestine. 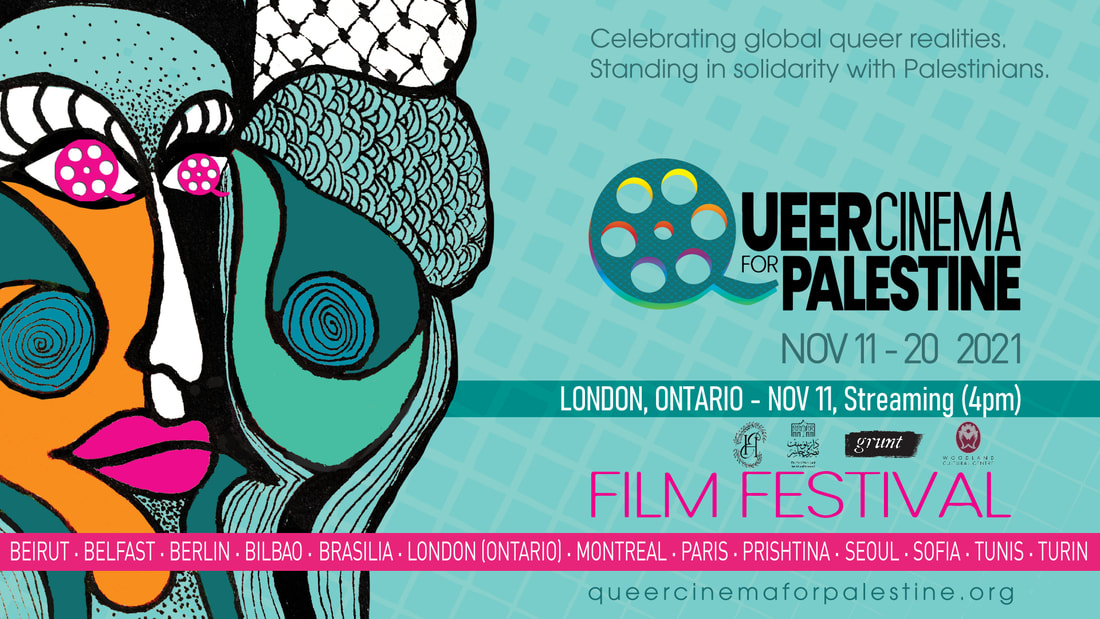 Presented by Embassy Cultural House in co-operation with Dar Jacir; grunt gallery; Queer Caucus at Western University, London Ontario; Woodland Cultural Centre. Queer Cinema for Palestine is organized by Aswat – Palestinian Feminist Center for Sexual and Gender Freedoms, the Toronto Queer Film Festival and the Palestinian Campaign for the Academic and Cultural Boycott of Israel, together with dozens of partners around the world.