Paintings from Andy Patton's solo show at the ECH

​Both paintings used exactly the same image, which was a Letraset image of canvas, greatly magnified, which Janice Gurney had used in her work, “Screen.” These were painted during the years of the AIDS epidemic at its height. Andy thought of these paintings, and then others which also used the same image, as nets to catch mourning in. He felt as though all he could do was to paint the same image again and again. 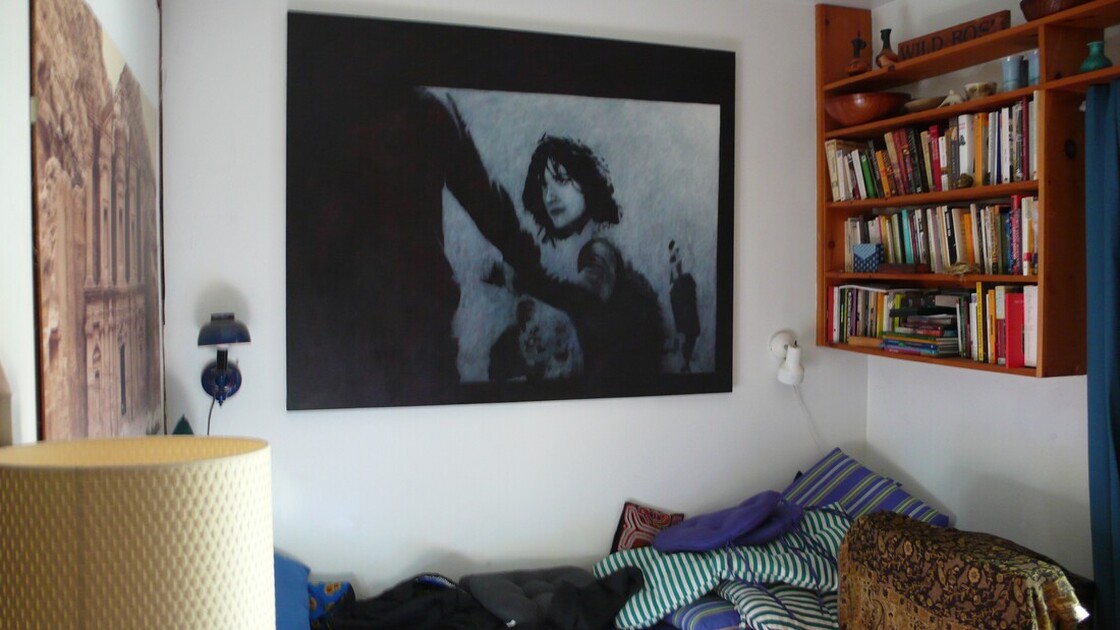 "Janice and I were invited to London to meet and connect with the artist community there. We stayed at 514 Pall Mall while Jamelie Hassan and Ron Benner were in Cuba for the Havana exhibition of the Havana-London exchange.  Jamelie's teenage son, Tariq Hassan Gordon, was there at Pall Mall as our chaperone. For some reason, I remember especially going for dinner with Tariq at Mykonos Restaurant, a Greek restaurant nearby on Adelaide St.

Artists could contact us there and invite us for a studio visit—or simply conversation about art, as they needed. During this period we got to know  many of the active members of the Embassy Cultural House and other London artists including: Wyn Geleynse, Thelma Rosner, Fern Helfand, Gerard Pas, Jennie White and David Merritt—as well as curator, Judith Rodger.

When Greg Curnoe returned from Cuba, he came to Pall Mall for a visit and indicated that he was slightly miffed that we hadn’t asked him if we could visit him in his studio at 38 Weston Road. Because we admired Greg so much, we had been too shy to ask! So we made a visit to the studio where we were immediately struck by his new text works, which were made after his large rubber letters had been cleaned. Janice decided that Greg had to do a show entirely of text works, to which he replied that he never did this, that he always mixed text works and image works in an exhibition. Janice, in her stubborn way, ignored his protest and insisted that it was important for his work that these new text works be shown on their own, without reference to images. When Greg eventually agreed, we approached YYZ, which almost instantly agreed to host this show.

When Jamelie Hassan returned from Havana, I believe that was when we decided to trade works with each other. I received one of the tall beautiful watercolour paintings of water lilies from her series, “Water Margin.” Each one is labelled by a period of Chinese pre-history. She gave me the one labelled “Slave”, saying, “Because you know what it is to be slave to your work.” I still see it every day. From my work, she selected the painting, “After the Revolution” which quotes a still from Bernardo Bertolucci’s film."