EMBASSY CULTURAL HOUSE
​Empty Square presents two virtual spaces that engage digitally rendered figures and objects. One is a phantasmagoric memorial site, the other, a dystopian surveilled space. Both spaces reveal how the effects of authoritarianism shape and obscure what is construed as the public.

A goddess is presented in a virtual space using 3-D imaging software. The work replicates the “Goddess of Democracy” statue at York University in Toronto, which is itself a replica of the original statue made by student protesters at Tiananmen Square. The statue is now relegated to an unremarkable location on York’s campus, away from traffic and possible controversy. 任鈞’s Goddess embodies the frail uncertainty of this history, as the Chinese state continues to outlaw the public memorialization of the massacre.

In Alistair MacKinnon’s Republic, a public square populated by citizens and law enforcement is seen from the perspective of CCTV, drones, body cams and cellphone cameras. Demonstrating the algorithmic racial bias of facial recognition technology, abstracted reflective bodies register under multiple camera angles while muted gray figures blend into the background. A project spurred by Black Lives Matters protests, these automated perspectives betray how racial hierarchies are embedded into a surveillance state.
​
This exhibition takes place on the 32nd anniversary of the Tiananmen Square massacre, to remember the students and demonstrators who lost their lives on June 4th, 1989. Below, you can find reflections and memories of June 4th, shared in solidarity by members of the Embassy Cultural House community. We invite you to light a candle in your window, stage a one-person protest or develop your own ritual to commemorate the tragic events of this date.

Liu Xiaobo, activist leader of the June 4th Tiananmen Square Protest in 1989, recipient of the Nobel Peace Prize, explained his decision to remain in China when most of his peers had chosen to leave. It was his way to memorialize the Tiananmen Square Massacre, to keep the victims’ ghost company.

June 4th is an event erased by Chinese rulers from history. I foresee its public memorialization will soon be outlawed in Hong Kong as well, where I am a citizen. With its erasure from history and memory, the original clamour and sacrifices of June 4th is fated for dispersal, relayed only as traces of hearsay. Today the repressed event seems to assume a liminal, “ghostlike” aura. Thus, an urgent question arises: How should the June 4th Protest be properly memorialized today? I believe both the symbol and mechanism for memorialization should embody the event’s frail uncertainty.

On a couple of university campuses in Canada, there are “Goddess of Democracy” replicas of the original one made by the protesting students on Tiananmen Square, a symbol to channel their collective hope. On at least one site, the statue has been relegated to an unremarkable location, away from traffic and possibly controversy. As a response to the gradual demise of the symbol of June 4th, I propose to create a different kind of memorial, a different iteration of the Goddess. My iteration recognizes the “becoming-liminal” and marginalization of the June 4th event and its memorial statue. My proposed Goddess is immaterial, spectral, “ghostlike”. It “exists” and is distributed in virtual space and digital networks.

I will replicate the Goddess in the virtual space with 3D imaging software. This virtual replica will appear as a phantasmagoric hologram, with an insubstantial presence in the virtual space of the computer. The holographic (also virtual) statue has a “haunted presence”. It will be situated within different simulated environments (forests, public spaces, galleries) interspersed with historical visual and audio footage of June 4.

Republic from alstr mack on Vimeo.

Republic began as a simple idea - a square in an unnamed city built in Unity3D populated by citizens and law enforcement. It was spurred on by recent BLM protests and an old project I had postponed a year ago and was supposed to have a vibrant color scheme like the previous works, but I eventually decided to go with the black and white thermal imaging used in drone and UAV footage.

I then moved on to multiple camera programming in unity, as I had the idea for multiple angles of the main square showing different narratives. Things could appear normal and then show police brutality, which was to be the main feature. After researching more about the effects of government and police surveillance and the poor detection and mismatching of black faces by facial recognition software (which the Met police currently use) I began working with a more surveillance based approach. Scenes were added featuring a CCTV room, drone footage as well as a screen tapped into someone’s front facing phone camera as well as what they were doing on their phone. Officers (named OPS) were added, and a helmet cam and body cam were added to guarding and patrolling personnel, as well as one which had been disabled remotely or by an officer (something that happens frequently in the US). Additionally scenes were added to hint at future developments when Republic was updated, such as a maintenance tunnel.

The citizens were given an AI pathfinding system that allowed them to randomly select places to walk to in and around the city square. The OPS had predetermined pathing. One of the main aspects of Republic was the fact that some citizens did not show up clearly on all of the cameras. In the scenery, most individuals are white hot, while some around the edges of the square and moving around were a more muted grey that blended in more with the background, further embedding the facial recognition issues above.

When the original project was ready it was streamed live on Twitch for 2 hours, moving between different camera perspectives in real time, to cement the artwork as a live piece rather than a prerecorded video. People commented and asked questions in twitch chat, and I decided to answer them in real time in order to have an active dialogue about the work and themes alongside the work. I plan to stream it again when more locations, objects and potentially animals are added.

​I rented a cottage in Port Stanley in 1981. My plan was to do a series of paintings at the Moore Water Gardens. I focussed on the lotus pond. I was impressed by the presence of this radiant water plant with its historical and cultural significance cultivated in southern Ontario. A decade later I re-visited the same lotus pond. I painted as I rolled out the large scroll of paper onto the ground at the pond’s edge. The work became a tribute to this mother site.
​
The textual references are also a tribute to Tiananmen (1989) and Oka (1990) - two conflicts, which involved the armies of two nations (China and Canada) confronting the protesters of their respective countries. 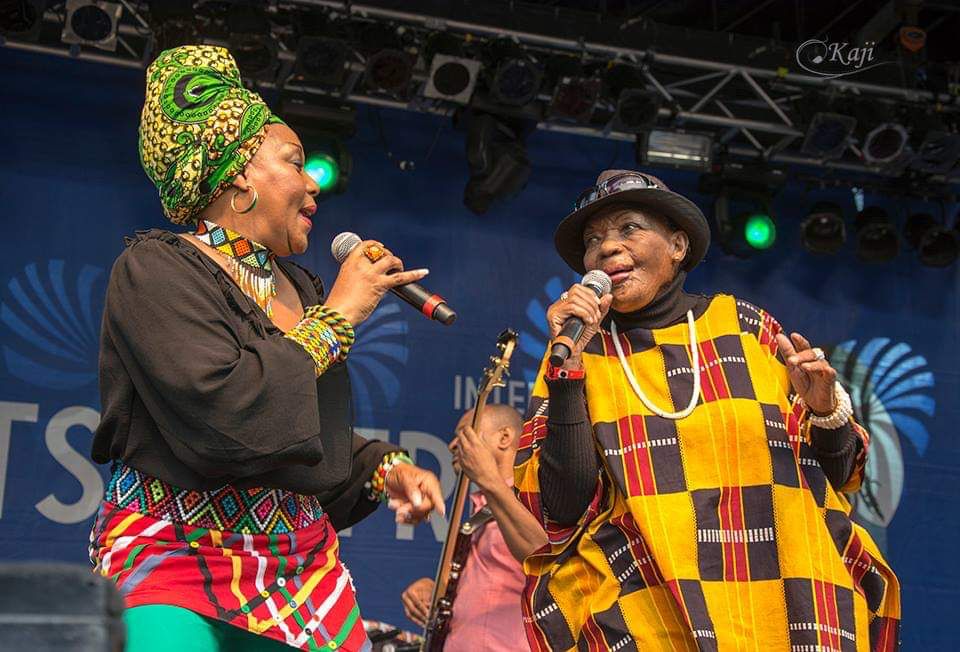 Lorraine Klaasen and her mother, Thandi Klaasen at the July 4th Nuid Afrique festival in Montreal, 2015

At that time, June 1989, I saw from outside South Africa, what was unfolding in Beijing and the Chinese government's crackdown on the students and demonstrators in Tiananmen Square. I remember the news images of the Chinese troops going through Tiananmen Square & I vividly recall the bravery of these young students and demonstrators - not moving in the face of the Chinese military's tear gas, the tanks and armoured vehicles - who lost their lives.

You could see the resilience of these young people. That is what I really remember - and took me back to June 16, 1976 and the young protesters of the Soweto Uprising. These protestors who were no more than school children, rose up against the South African brutal regime of apartheid. South Africans on this "Youth Day" pay tribute every year to the young lives lost on June 16, 1976.

On, June 16th 1989, my mother, Thandi Klaasen, and I were in Greece with a musical troop called Sola Sola (meaning regret, regret) on the 13th anniversary of "Youth Day", commemorating the Soweto protests and boycotts continued against the South African government.

The young people of South Africa said "enough is enough". I lost 4 members of my family - young people who were thrown out of the train as they were going to attend the protest and were killed. Family members and friends lost their children because it was these young kids that paved the way. I think South Africa exists today, free of state-apartheid, because of the sacrifices of these brave, young people.

You could see the resilience of these young people. That is what I really remember - so like the protesters of Tiananmen.

I honestly don't remember June 4th. My memories are mixed up. I remember Tank Man, but I think that was the day after. I remember the flurry of rumours, which grew always darker.
A confusion still wraps my head.

What I remember better was the protest here in Toronto a few days later. Andrew Lee, my old friend and HKer, called to tell me about it. We met on Bloor Street as everyone formed up. People gathered and walked slowly up St. George Street. Most people were speaking Cantonese, and some in English.. Everyone held a white flower.

We reached the consulate. One by one each person stepped forward, walked up to the edge of the PRC consulate property and quietly bowed, then laid their white flower down and stepped back. It was formal in a way I had never experienced in any protest I had been to in the Western left. It felt "considerate." I don't know if that would make sense to anyone else.

Far away, in Xi'an, a student was protesting near the Drum Tower. I didn't know that decades later, she would become my friend. 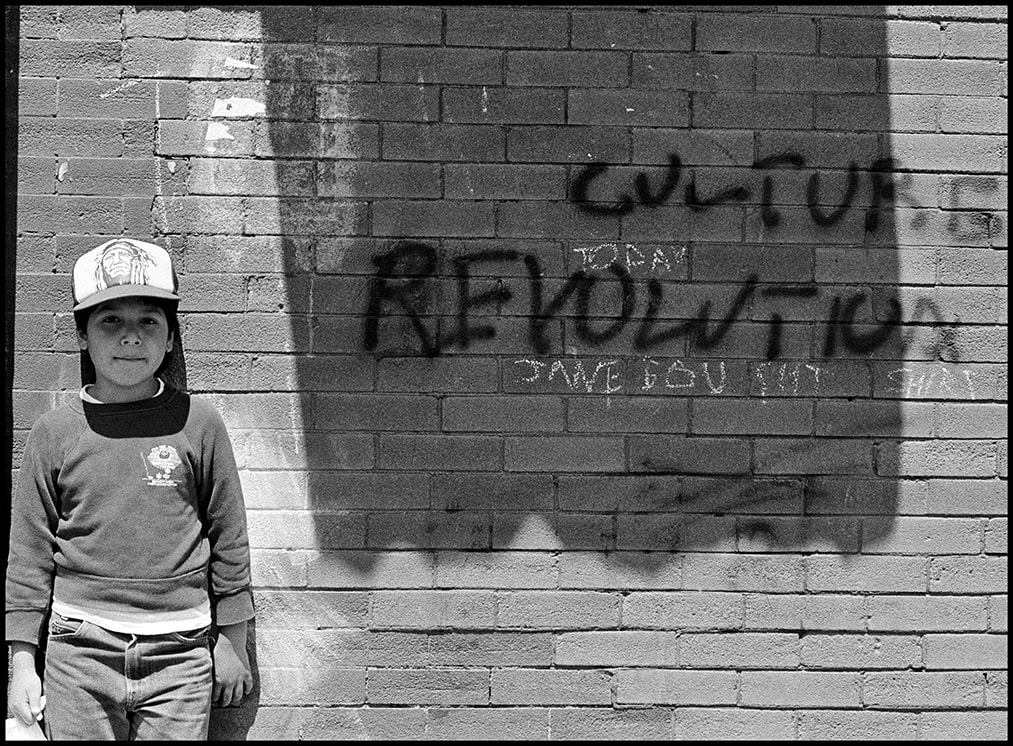 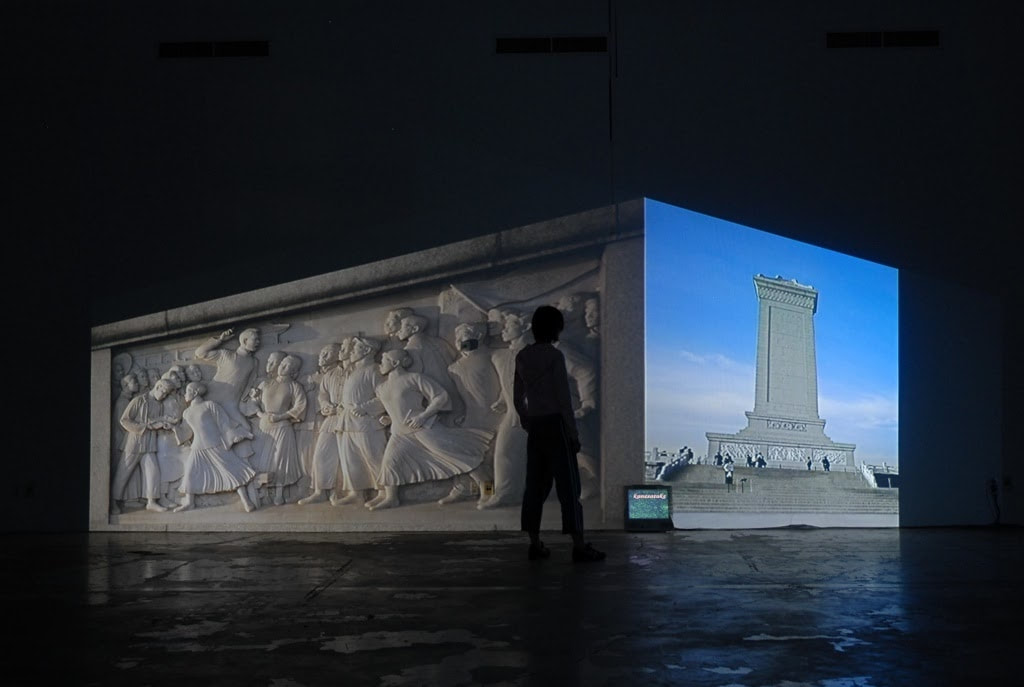 One set of prints is of paving stones taken months after the Tiananmen Square Massacre of 1989 in Beijing – cracked, damaged, with military and parade markings, some the result of the military assault on students and protesters, some weathered over time. The other set of photographs are of the golf greens, fairway turf, divots, flags and holes at the private Club de Golf d’Oka in Québec. In 1990, the club’s development plans on contested lands triggered the Oka Crisis resulting in a 77-day standoff between the Canadian army and native militants from the neighbouring Mohawk communities of Kanesatake and Kanewake.
​
Two parallax projections zoom towards the steps and social realist bas-reliefs of the Memorial to the Peoples’ Heroes, damaged by tanks and gunfire during the Massacre. A video monitor displays golf course greens dissolving into sandtraps in reference to the attempted (and eventually thwarted) expansion of the Oka Golf Club into traditional Mohawk land and burial grounds in Kanesatake.