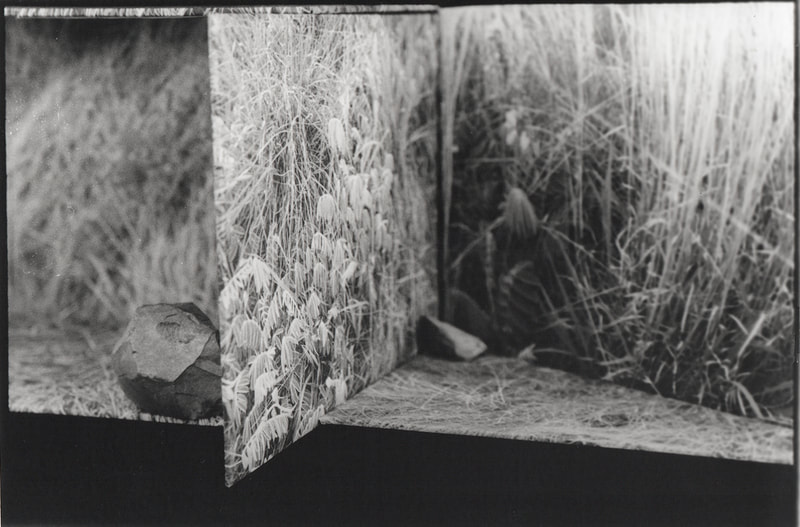 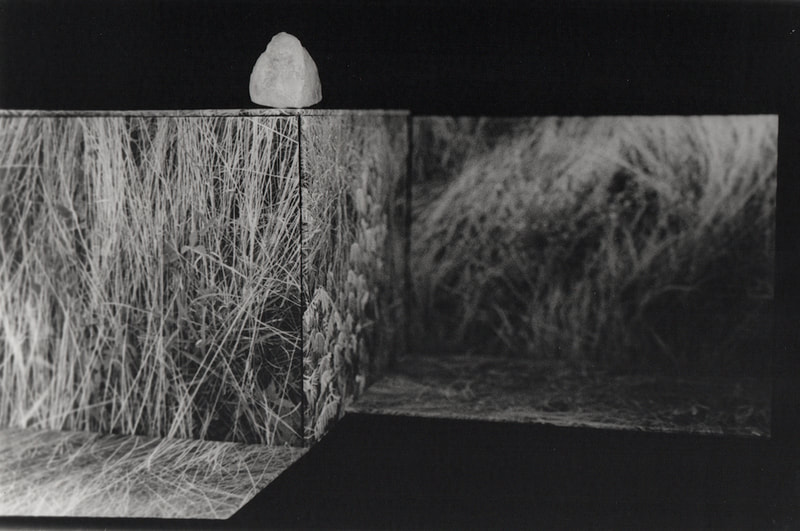 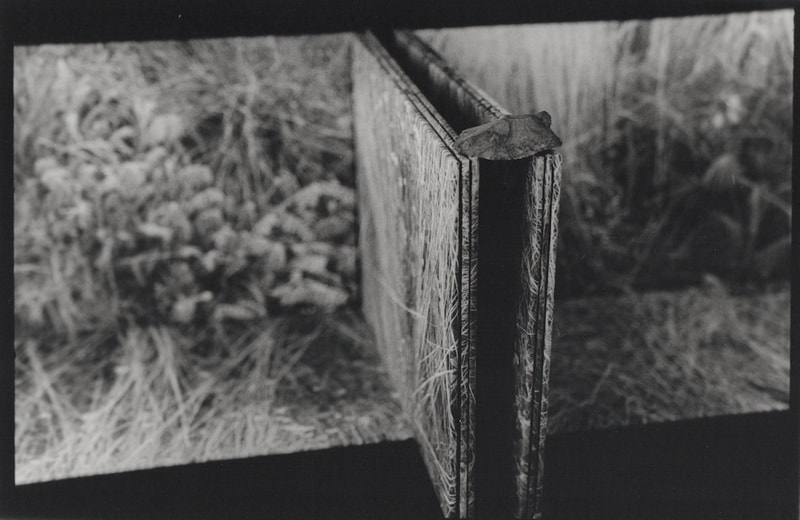 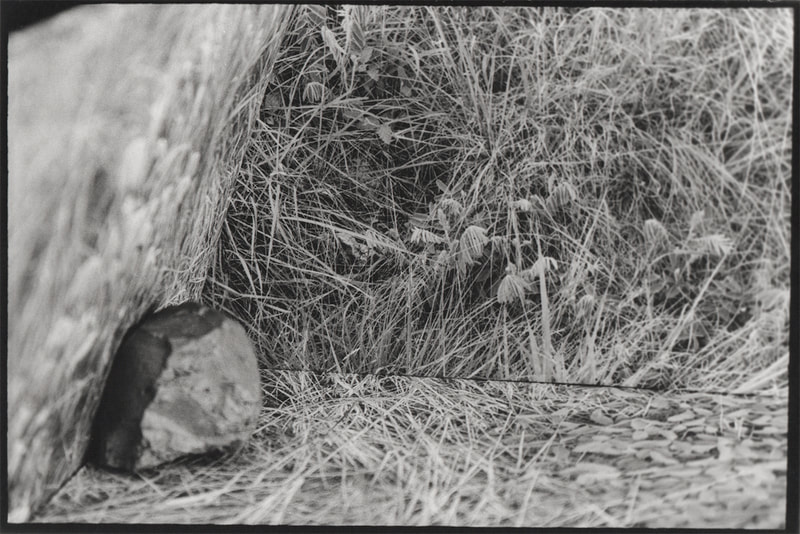 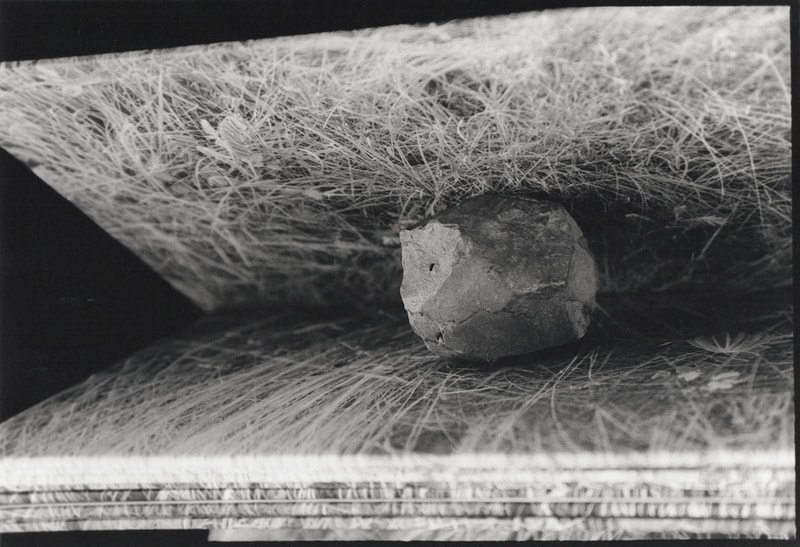 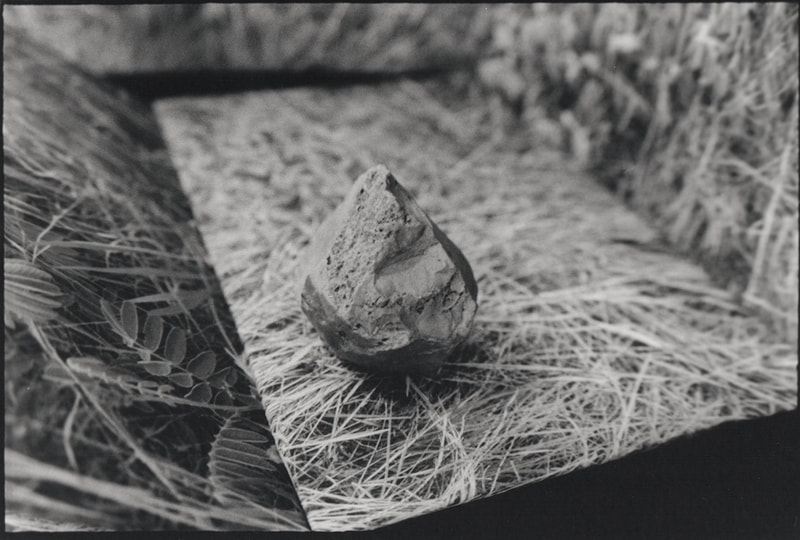 ​Delayed spaces, 2020 | Analog photography | 20.3 x 25.4 cm ea. | A series of analog photographs made in my studio. Rocks that I gathered during a walk in the surroundings of Mitla, Oaxaca, and printed photos of grass from random places. 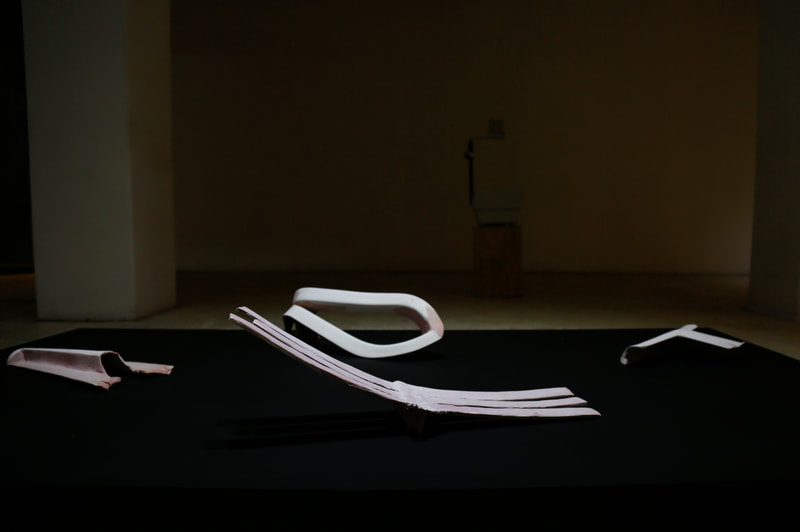 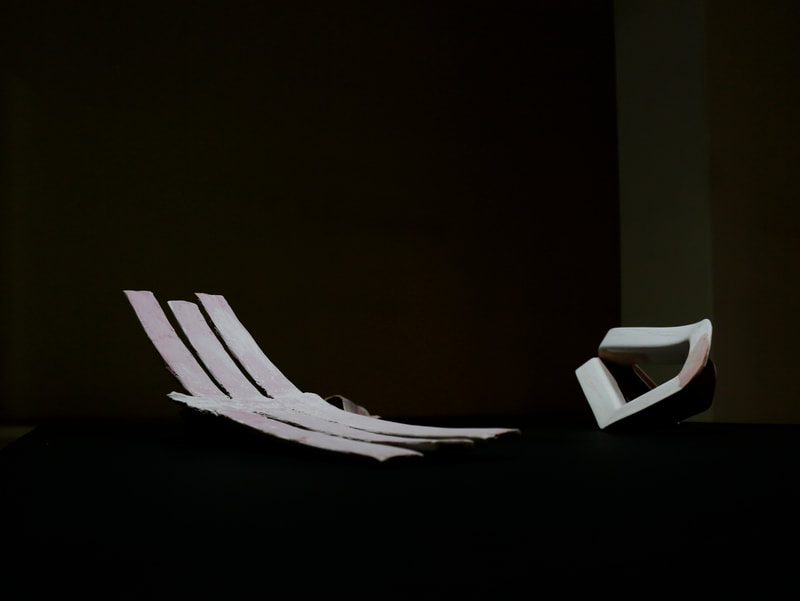 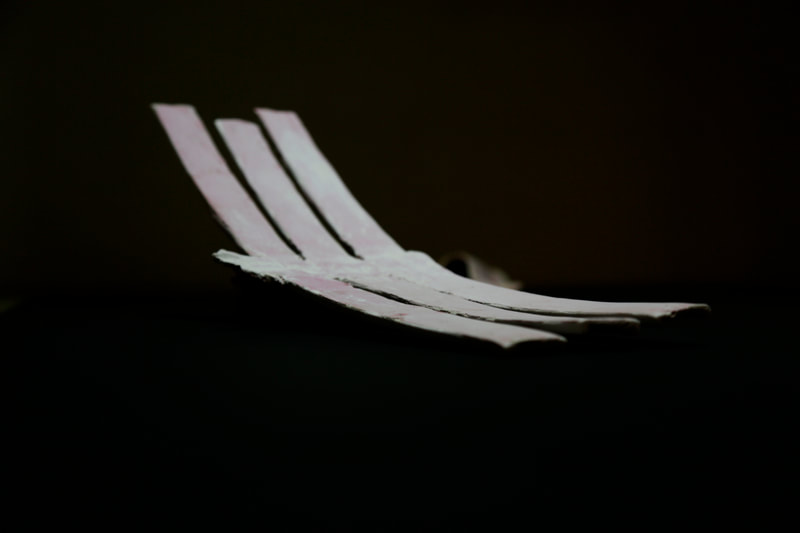 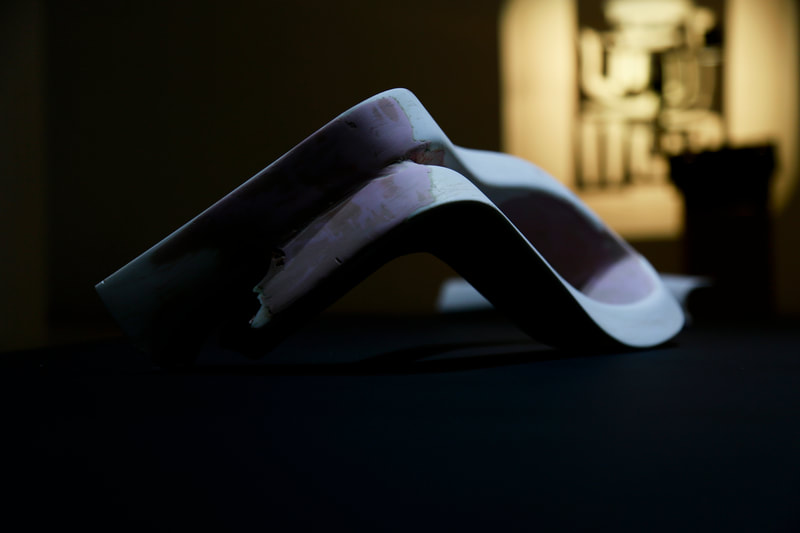 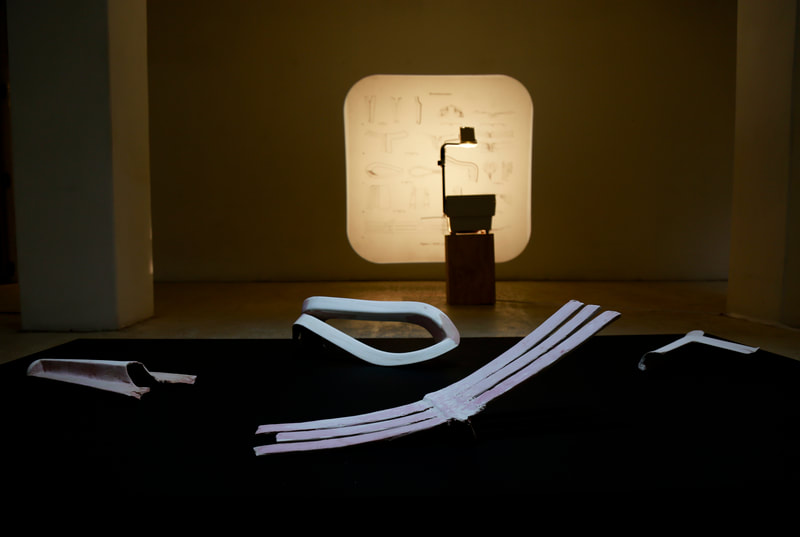 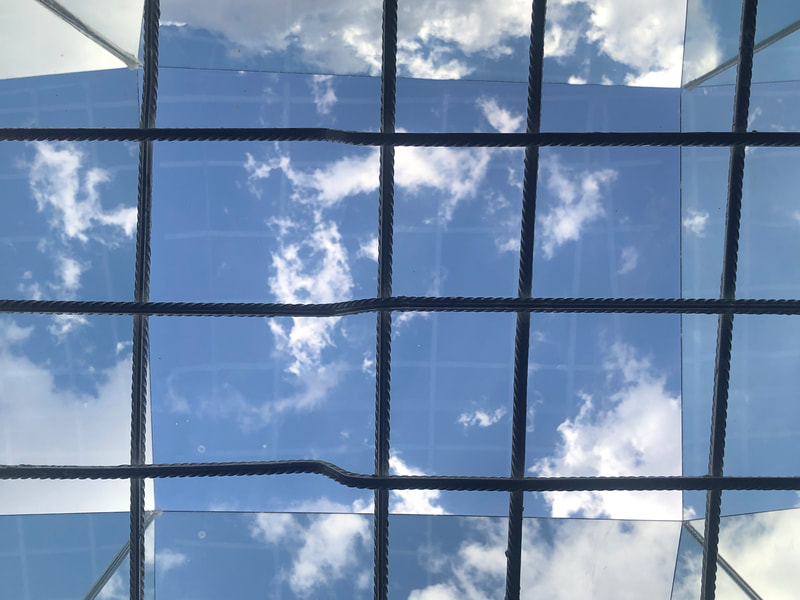 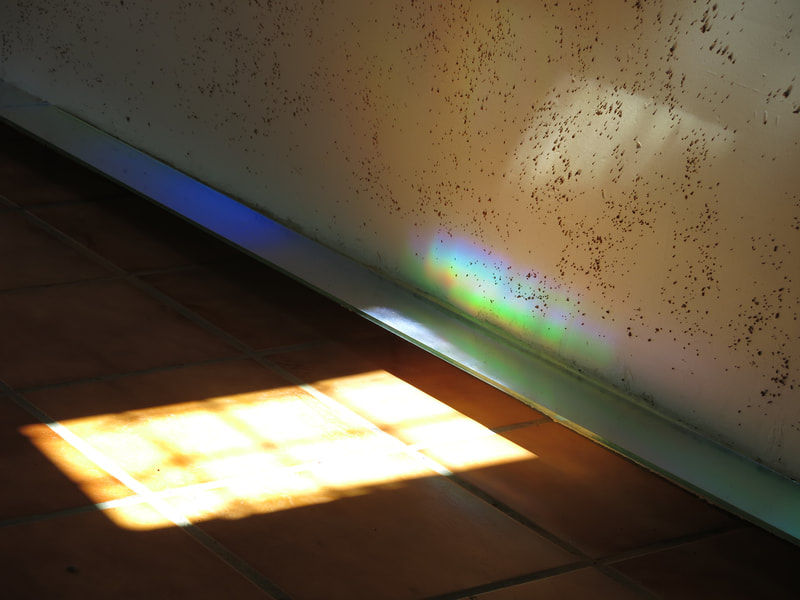 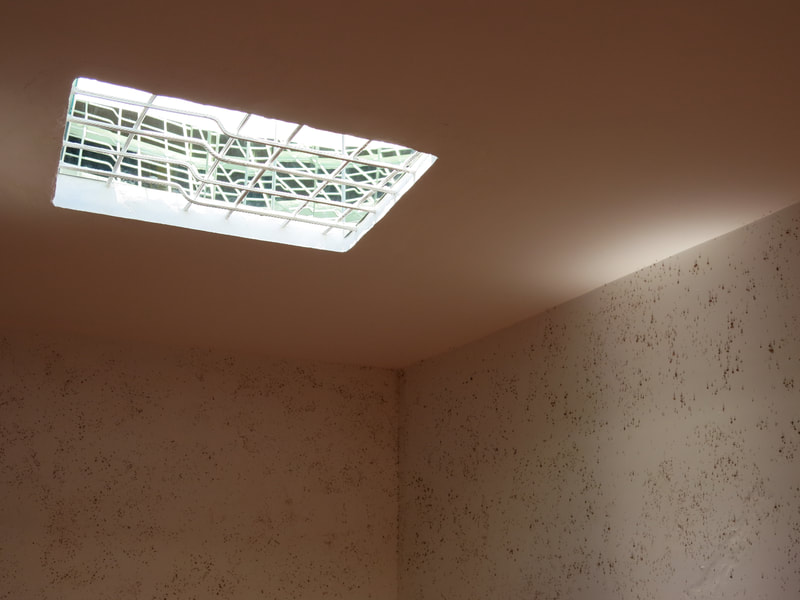 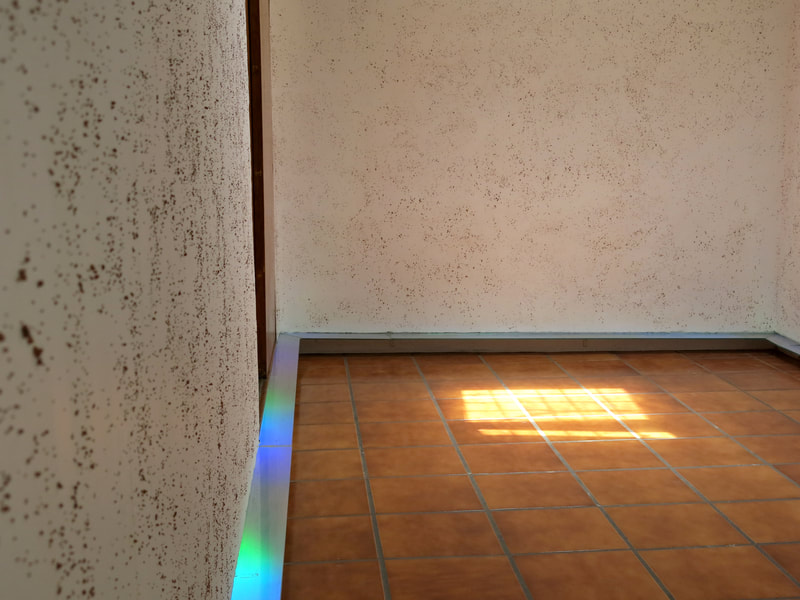 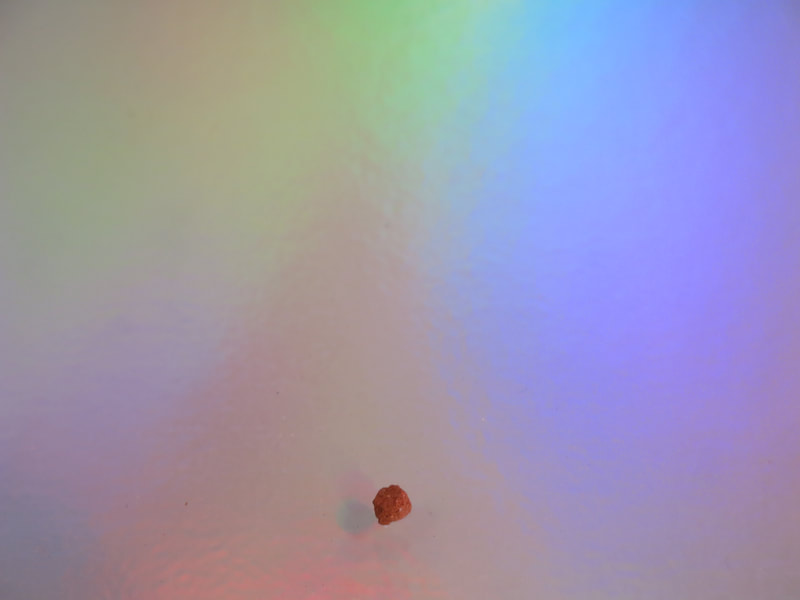 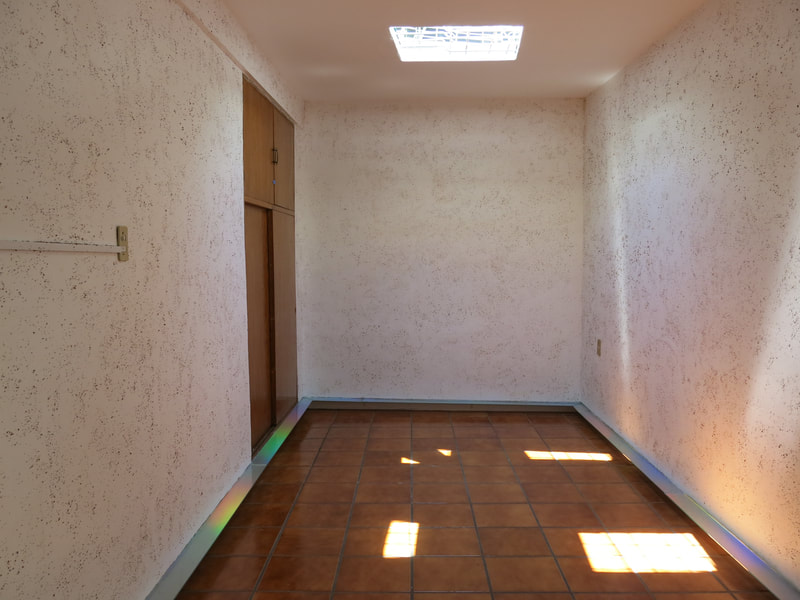 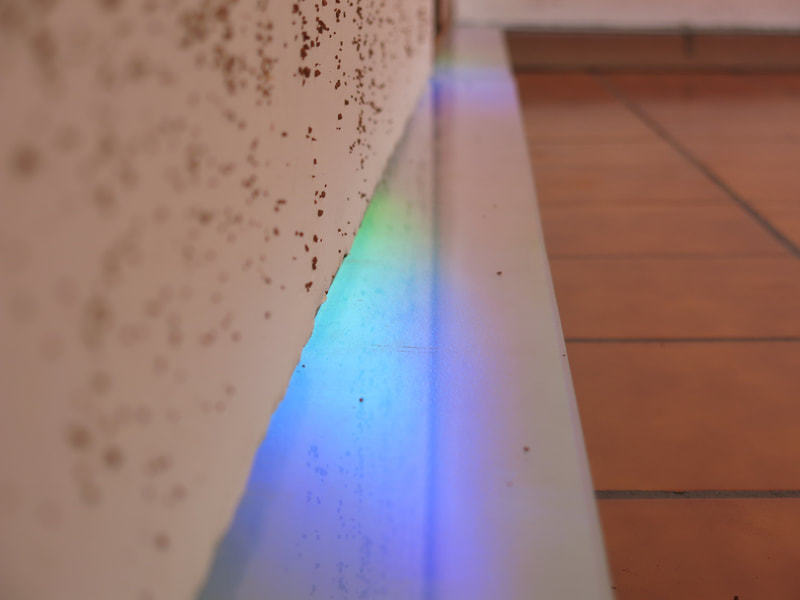 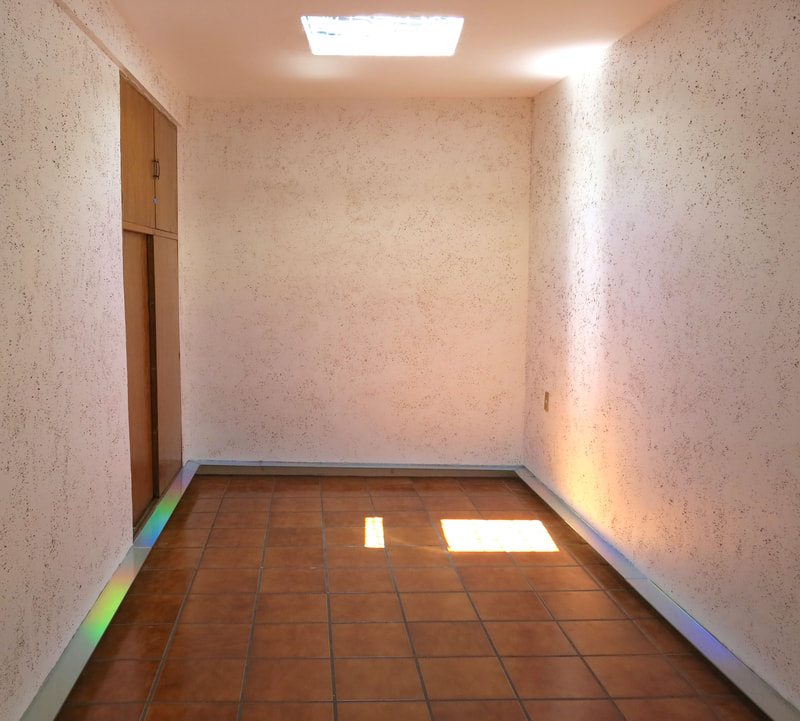 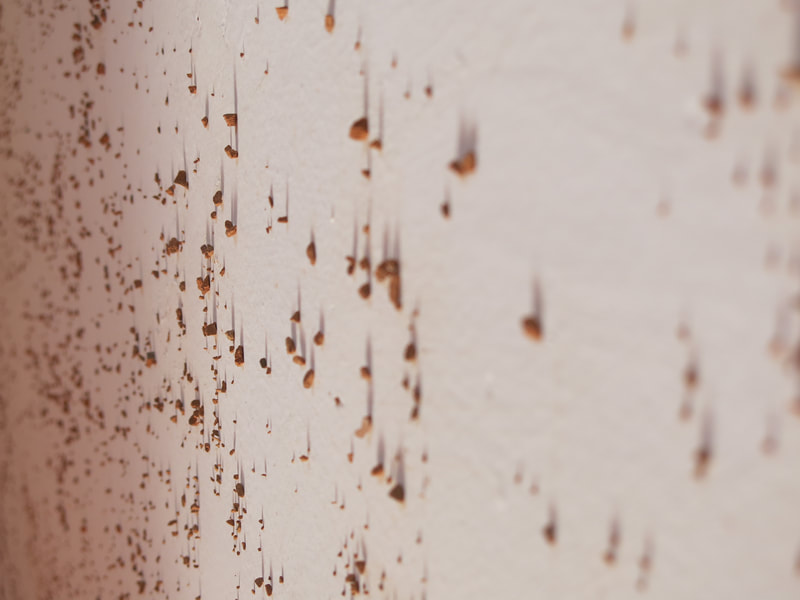 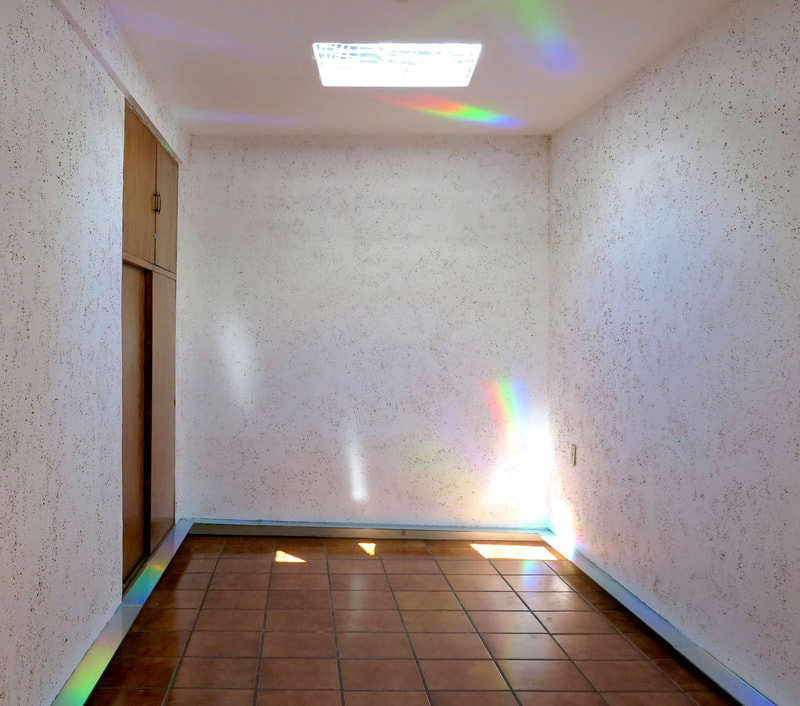 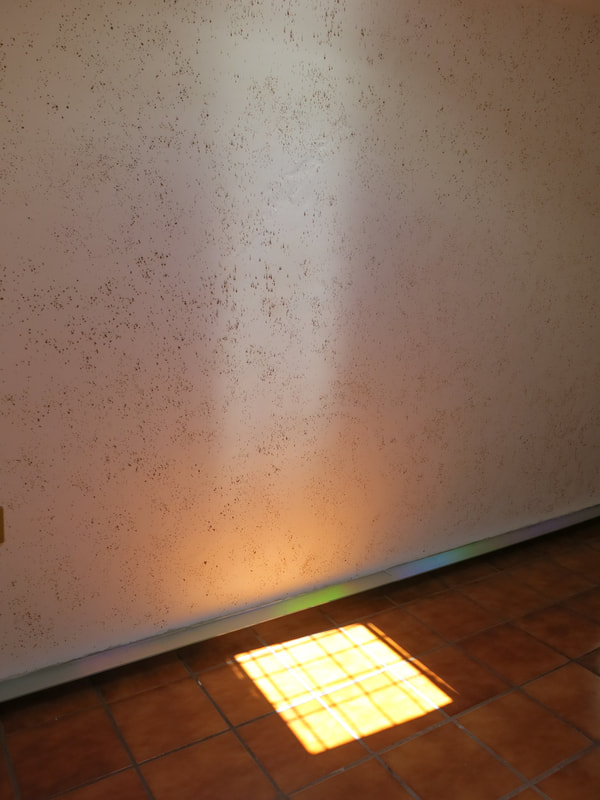 I was commissioned to do a piece in a spare room, approximately sixteen by eight feet in a Oaxacan apartment. The dominant feature of this space was an old skylight in the ceiling. From the beginning, I realized that I could use the skylight to focus attention on the ephemeral qualities of natural light and the passage of time. To enhance the light I surrounded the skylight with mirrored glass, in the hollow space that separated the rooftop above from the room below.

I used corn flour paste to attach very small shards of pottery to the three walls of the space and added a horizontal glass border bonded with holographic paper approximately 4 inches above the floor.

Throughout the day the passing sun constantly changed the forms that were reflected across the surfaces of the gallery. No two consecutive days were identical. For me, although the space had no objects, it was filled with light and air, and potentially with thoughts and memories.

Through my involvement with the INAH (Anthropology and History National Institution), I have considered the intrinsic historical value of pottery gathered from prehistoric sites and to the glass material used to protect and isolate these shards in displays. Here in this installation pottery and glass were used not as objects but as material indicators for the marking of time. Glass enhanced the light while gravity, another marker of time, pulled shards from the wall to accumulate onto the glass below.

​Skylight at Roberto’s apartment
​
Roberto, as his friends from Oaxaca affectionately called him, had an enviable view of Oaxaca City from his apartment rooftop. In our chats and language exchange sessions, with our eyes fixed on the landscape, many of our conversations were about the layers of history that are still visible and palpable, particularly in this Mexican city. He loved this place. I miss our numerous pleasurable conversations on his terrace.

Roberto was very interested in the work of several Oaxacan artists. In his last few years he visited these artists in their studios to learn more about their projects. Establishing rapport with them he planned to encourage their creativity by hosting temporary installations of their artwork in his apartment. My installation, Skylight was the first installation Roberto commissioned. He designated one of the rooms in his apartment for that purpose, with the intent that other artistic responses would follow.

I drew on our conversations about the genre of landscape, which has given rise to much of my work. Roberto’s rooftop terrace was connected to the exhibition room below. The skylight was the architectural element that made me think that I could condense those conversations down into  the inside of this unique space with three walls that opened onto his living area. I wanted to bring the sky, the landscape and our combined thoughts down through the skylight. I think of landscape not only as something that is possible to frame from a distance but also as an accumulation of knowledge and wisdom. I like to think of pottery as the pre-Hispanic cultural material that has persisted to this day; pottery is also part of the earth and refers to an element of the natural landscape.

Contemporaneous holographic film was adhered to the glass that ran along the perimeter of the three-wall installation. At certain times of the day, the film refracted the light, dispersing it on the walls and floor. Although this arrangement of elements is an abstract landscape of sorts, these elements were able to trace the passage of light in the room and therefore trace time. The immaterial light is like a memory of a past time projected onto the present. From Roberto’s table and chair set across from this room, he was able to closely observe the installation.

The particular architecture of his apartment and the scale of the adjacent gallery space made this installation particularly effective. Knowing that Roberto spent long periods of time alone in his Oaxacan apartment, I wanted to create a personal space for him that would evoke the heightened, but gentle, perceptions of our many rooftop conversations.

He liked to have some clay pots in his apartment that the artisans here produce. I also have a fixation with this material by collecting useless ceramic fragments scattered around, many of them pre-Hispanic and found in archaeological sites called tepalcates. Clay was a symbolic material that interested both of us. I adhered shards of the traditional red earthenware to the walls. They were at one time vessels very similar to the Oaxacan vases that Roberto used for his fresh flowers. It was my hope, that by using a combination of elements that were already appreciated in Roberto’s domestic environment, I could create a dialogue between his living space and my installation, a meeting place of the real and imagined world.

​The current work of Lissette Jimenez is inspired by her experience of the area that is now thought to have been the earliest place in North America where land was purposely cultivated to produce food. The site is closed to the public and is being excavated by the Instituto Nacional de Antropologia e Historia (INAH). In addition to seeds and tools, archaeologists have also discovered a system of caves with prehistoric painting. Through the millennia cities were built and abandoned near the site leaving layers of history bonded by the continuity, in Lissette’s words, of a population with shared belonging and identity. In one work she seals off one of the most important relics, an intact pot that, in fact, strikingly resembles pots still being produced in pottery studios today, with many layers of glass. Since childhood she has been collecting contemporary shards—bits of plastic and glass, rusted cans and pop bottle caps, and so on. For one exhibition she embedded items from her collection in a gallery wall, placing them in the configuration of the stars in the night sky as they appeared at the time and location of the installation. Her work comes from her reflections on the continuity of human existence and the responsibility of a particular action in a specific place.