Inspired by Duchamp’s the Large Glass, Bride Machine is composed of single broadsides, transparencies, chapbooks, and other printed works. Each folio in Bride Machine is both a disruption and meditation on the act of reading, challenging readers’ assumptions about the codex and the ephemeral nature of the archive through the counter-narrative of its hinged, folded, coiled, bound and stapled elements. Part amuse-bouches, part observation, Bride Machine is also a rigorous interrogation of desire, the fourth dimension, conceptual poetics, and the emancipation of Duchamp’s Bride from her apotheosis of virginity.

Courtesy and copyright of the artist

"In Waiting Room reality is only an imploded structure, as though a camera has been set for an infinite exposure, which renders all contingencies – that is all history, all ethics, all power – irrelevant and imperceptible.  This Waiting Room, it is clear, exists at the end of history, beyond anticipation, beyond form itself."

Ian Carr-Harris, guest curator for How We See What We Say, Art Gallery at Harbourfront, 1986.

Snow stated in 1984: "I make up the rules of a game, then I attempt to play it [and] if I seem to be losing, I change the rules. Beyond the rules lies radical art."

Private collection, Calgary. Courtesy and copyright of the artist and Olga Korper Gallery.

Hyang Cho practised and performed Bach’s preludes and fuges known as the so-titled Well-Tempered Clavier.  Each performance was software transcribed as played, including error-variations, and printed in a book form. 72 versions were originally done, but the first 20 were not bound. There are 52 bound books, numbered from 21 to 75.

In 1991 Dyck found a source for making art that combined her preferred modus operandi of process and chance: the beehive. Once again it was a fortuitous event, this time a visit to an apiary to buy wax for her canning objects, that introduced her to the complex society of bees. As apiarists know, foreign objects placed in the hive are immediately covered over with wax and honeycomb structures. Dyck was struck by the bees' determination to make these unwanted objects more familiar by covering them with honeycomb, and she began putting unlikely objects into the hive to see how they would be altered. Dyck always gives credit to the bees, even calling them her collaborators, and indeed to a large extent she does give up control when she places an object in the beehive. The bees do their work in the summer months and in September she removes the objects from the hive. Once the bees are finished Dyck will not change a piece. A cool summer, for example, can completely reduce the bees' usually fanatical work habits and leave the art only minimally decorated. The bees are given the final say, and that, so to speak, suits the artist's modest manner very well.

Serena Keshavjee, excerpted from AGANETHA DYCK: Nature as Language, Gallery One One One., University of Manitoba, 2000

All works courtesy and copyright of the artist, and Michael Gibson Gallery, London ON

Imitations of Myself #2, 1973/2013
chromogenic print, edition of 5
79 x 84.77 cm
Courtesy and copyright of the artist, and Georgia Scherman Projects
One impression, Collection Museum London.

“I don’t try to say what my identity is.  I’m not some heroine recounting my life.  I needed a constant, a vulnerable subject for a reference point.  The reason I use myself as a model is because I’m always on hand, always around.” 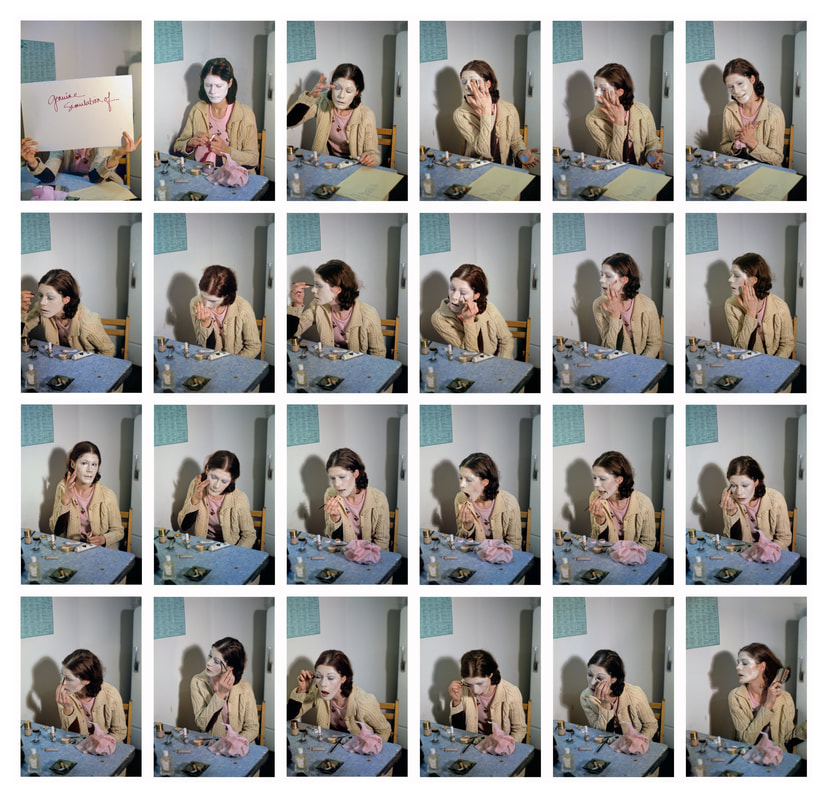 401EXIT232: EAST AND WEST is a montage of images of an endless stream of traffic from both east and west.  Taken from the height of the overpass – the location site for Jack Chambers painting 401 London No.1, 1968-69 (Collection Art Gallery of Ontario, and based on source photographs that Chambers shot  – the photos mark the importance of the 401 as the key transportation corridor across Ontario. Developed in a patchwork system since 1952 as a means to bypass Toronto, the 401 at times feels that it is bursting at its capacity.  This is a very different reality than the one rendered by Chambers, that of a serene car ride towards his home in London, punctuated by rolling hills, agricultural lands, wooded lots and the odd cluster of industrial buildings.

Gary Spearin undertook a campaign to place a commemorative bronze plaque near the location where Chambers shot his original study photographs.