Embassy Cultural House is pleased to present Sleepwalking (夢遊), a series of screenings, talks, readings, exhibits, open calls, and events in solidarity with the people of Hong Kong who are fighting the 2019 extradition bill. In China and Hong Kong, political issues are often spoken about indirectly. In Hong Kong to say “I’m going sleepwalking/I’m dreaming” is a way to say you are going to protest. Through this program we hope to highlight ongoing events in Hong Kong and connect them with artists, experiences, and issues from our own communities as a means to build transnational solidarity.

PROGRAMME:
Stay tuned for more announcements! From everyone at ECH, we wish you health and happiness for

1.  Full withdrawal of the extradition bill

2. Retraction of the characterisation of the 12 June 2019 protests as "riots"

3. Release and exoneration of arrested protesters

4. Establishment of an independent commission of inquiry into police behaviour

5. Resignation of Carrie Lam and universal suffrage for the Legislative Council
​and the chief executive elections

Creation and Solidarity in the ECH Community

We are pleased to present a range of artists from the ECH  community and highlight works that embody the spirit of the Sleepwalking launch. All of these works highlight the ever-present support and solidarity with Hong Kong and surrounding issues.
Stephen Cruise, ECH Community Member 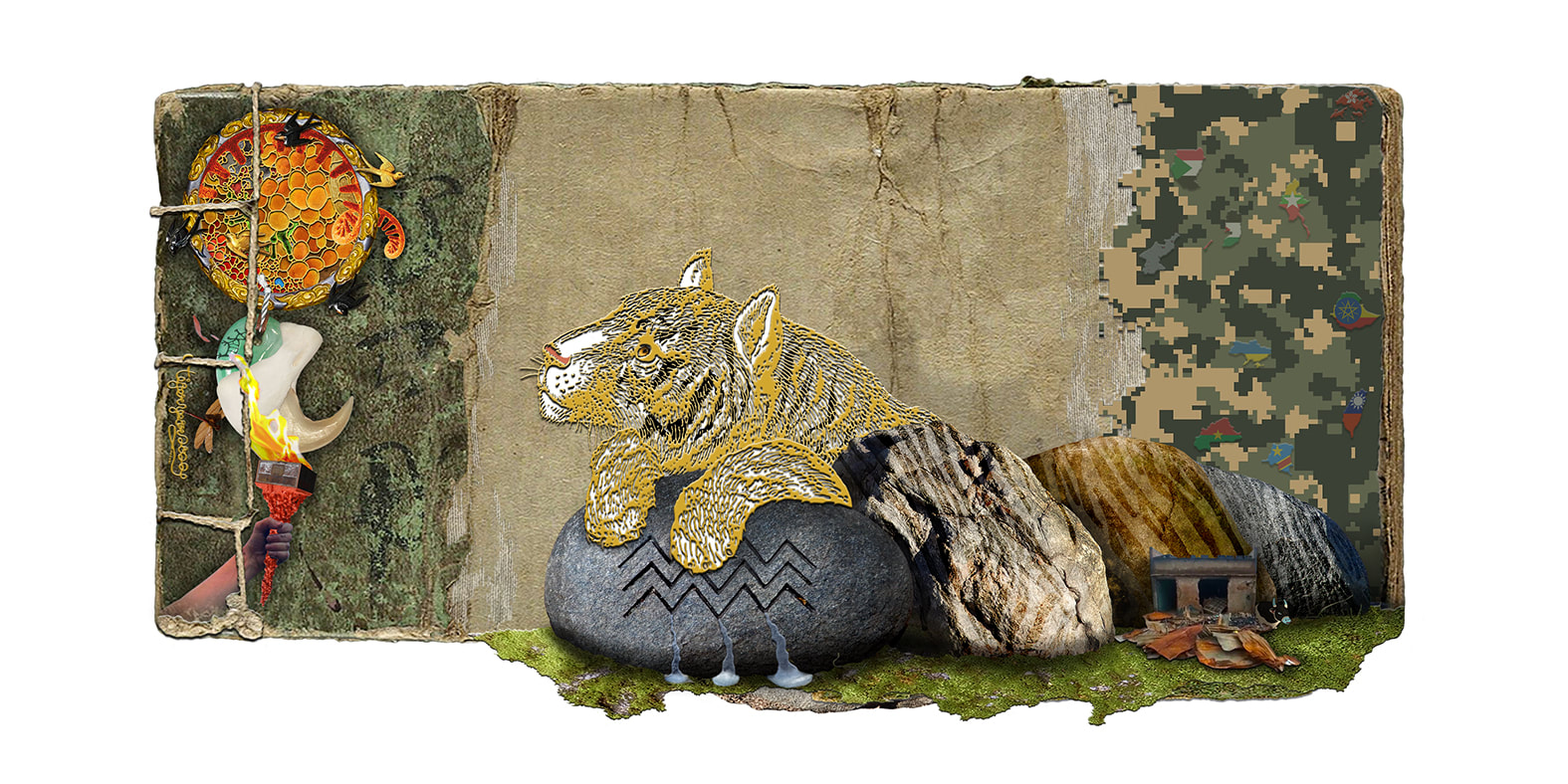 Year of Tiger, 2022
Begun in 2004 (year of the monkey) and continued throughout the years, the annual 'year of' drawing depicts one of the 12 animals of the Chinese zodiac. It begins one month before, with a completion deadline of January 1 of the new year.  A collage of residing/of the moment impressions are gathered and placed with the animal of the year. The given shape of the 'canvas' is based on the head towel worn in Kendo (tennugui/ Japanese).  Content is drawn from the heart and in residency on this blue marble... ​

​Year of Ox, 2021
With the Year of Rat/Mouse (2020) and with attentions on Hong Kong, I was intrigued with the means being used to protect buildings, curtail demonstrations, etc.  In researching the forms, I discovered that by their shape they had a name, given to them and used by the manufacturers.  They were called 'Buddha barriers' - when seen in profile they appear as a seated monk. I used them as a divide between two representations of the rat and mouse and as a screen for the national flags of past and current conflicts.

This song was recorded December 18th, 2019 and officially released at Hassan Law, here  in London, Ontario, Canada in February 22nd, 2020. I wrote the song after viewing some of the Hong Kong protests on TV and, hearing at some point during that time, that some of the protesters were disappointed that there was not much support from the rest of the world. I was a bit ambivalent about the situation, because of the fact that I knew that Hong Kong had been "handed-over" from the colonial-rule of the British government to mainland China, July 1, 1997 with certain conditions that were to be honoured regarding the one country, two systems arrangement. However, I sympathized with the protesters and their cause and I wanted them to know that there was at least somebody outside their sphere who cared about what they were doing.
​
​Anonymous Visual Artist and ECH Community Member

Lion Rock I, Enamel and cement on wood, 2020.
​
Lion Rock is an iconic mountain of Hong Kong. It does not only represent the international city, but it also refers to metaphysical meaning, the Lion Rock spirit, which means people with that spirit never give up and they work hard together to build a bright future.
As an international city, Hong Kong is well known for her concrete jungle. The painting was interpreted under the context of Contemporary Ink painting, in which Hong Kong has a significant role in its development.
The lack of human activities which usually appeared in ink painting prompted the current situation of Hong Kong. The contrast, texture, and thickness of black enamel paint hinted at the future of Hong Kong. The cement and paint are easily fallen off from the wood, representing the status of Hong Kong.